Symbol of Eternal Support: Father Gets Tattoos of Son’s Scars

Living with cystinosis has earned Chandler Moore a few battle wounds. After mulling over a way to symbolize the journey he’s sharing with his son, Clinton decided to permanently tattoo his son’s scars on his own midsection. We sat down with Clinton to talk about his decision and to hear what Chandler thought of this bold move. 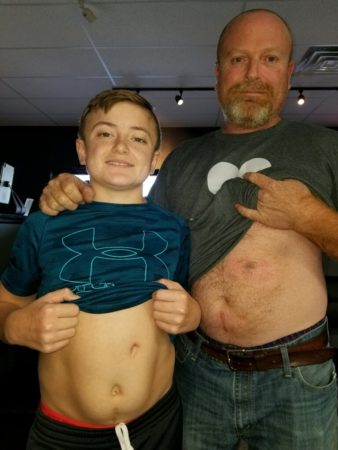 Chandler (left) shows off his feeding tube and mitrafanoff scars while Chinton (right)display his replica tattoos.

Q: Can you explain what caused the scars we see in this picture?

A: The upper scar is from the placement of a g-tube. This was needed to give extra nutrition and administer meds. The lower scar is from a more major surgery to create something called a mitrofanoff. Simply put, it’s a channel to insert a catheter from his belly button to his bladder to help with drainage.

Q: Are these your only tattoos?

A: Yes. I’ve never had an interest in tattoos… and still don’t. But after years of wishing I could take this disease for Chandler knowing I couldn’t I realized this is a way to share it. If he has to be “imperfect” so can I. Every scar that this disease gives to him my tattoo artist will give to me. I think this has impacted me personally more than it did him. Now I feel like I’m carrying it [cystinosis] with him.

Q: What did you son, Chandler, think of this idea?

A: Chandler thought it was a great idea and was quite happy to see me permanently tattoo them [scars] on me. He was even asked to attend on tattoo day so the artist could use him as a model.

Q: What do you hope to accomplish as a result of your new ink?

A: My hope was to show my son that he is not in this alone. I’ve got him. I always will. There is nothing I won’t do for him and if I could take this disease for him I would do it in a second. I would take it for every patient if I could. Also, to show him there is nothing wrong with being a little “imperfect”. Most imperfections are absolutely perfect.

Let us help connect you with other individuals/families near you.

See what’s going on in the cystinosis community.

Your contribution funds research for improved treatments, and ultimately, a cure for cystinosis.

Subscribe today to receive updates on the latest news and events.